1872 - First Class in Veterinary Medicine Offered
Nowhere in the world can you find a greater commitment of people helping people than at a land-grant university. Since Iowa State’s earliest days as a land-grant institution, veterinary medicine has been included in the program of study because of its value in serving animal health and food safety needs in our society. Iowa State has been a leader in veterinary medical education throughout its history. As legislative articles were drafted in 1858 to form the "State Agricultural College and Farm," it was specified that veterinary studies would be included in the subjects of instruction. When the first Iowa State class graduated in 1872, seniors in agriculture had received instruction in veterinary science.

1879 - Iowa State College of Veterinary Medicine Officially Founded
Evolving from a four-year course in both agriculture and veterinary science, Iowa State’s Veterinary School was officially founded in 1879. It was designated as the first state veterinary college in the United States and the first veterinary college in the west. At that time, veterinarians were being trained in private institutions and without consistent standards of academic content. The early private institutions ceased to exist by the 1920’s, leaving Iowa State as the veterinary school with the longest record of continuous operation in the United States - a note of distinction the school continues to hold today. In its first eight years, Iowa State’s veterinary division offered a two-year program. But faculty continually advocated expansion of coursework to include advancements being made in the basic sciences. In 1887 the curriculum was extended to three years, and in 1903 to four years - again setting Iowa State apart as the nation’s first four-year veterinary curriculum.

1912 - Expansion
The turn of the century student enrollment, as well as clinical work, began to increase rapidly, bringing with it the subsequent problems of crowded, inadequate teaching facilities and faculty shortages due to insufficient funds. This lack of support was the main concern of students and faculty for nearly ten years before the new Vet Quadrangle was built in 1912.Our Early Facilities Veterinary classes in 1885 were held in the lower level of the "Sanitary Building," which was located on the site where the ISU Memorial Union now stands. Since fresh material was used, dissecting didn’t begin until late fall because cold weather was required for specimen "preservation." Starting in 1912, specimens were preserved with embalming fluids, thus enabling dissection throughout the year. The veterinary program moved to more spacious facilities in Old Agricultural Hall in 1893. Until 1912, the veterinary department shared this four-story building, also known as "Botany Hall," with agriculture and botany departments. This fully renovated building is today named Catt Hall. Student enrollment, as well as clinical work, increased rapidly in the early 20th Century. In 1909 and 1910 the Iowa legislature appropriated money requested by Iowa State for the building of a new veterinary facility. In 1912 the Veterinary Quadrangle was completed, built at the north-most point of the campus. It consisted for four buildings connected by corridors, all arranged around a central courtyard. A fifth building was constructed to the north to house new clinical facilities. The clinic was further expanded in 1938 and named the Stange Memorial Clinic. The Veterinary Diagnostic Laboratory was completed in 1956.

For 64 years the Quadrangle was the heart of veterinary medical facilities on central campus. At the time it was built, it was described as "the finest in the country and excelled by but few of the European schools." The school became the first in the Midwest to have its own radiation therapy machine, purchased in the early 1950’s. Regardless of the high acclaim given to the Veterinary Quadrangle when it was built, the need for a more advanced facility was readily evident in the late ‘50s and early ‘60s. Haylofts and horse stalls were being pressed into service as offices, and departments began to expand into basements, corridors and utility rooms to gain more space. Plans for a new facility took shape and the site chosen was a tract of land adjacent to the Veterinary Medical Research Institute just north of Highway 30. Significant efforts were made to secure state and federal support. At a cost just over $25 million, the new facility for the College of Veterinary Medicine was completed in 1976. Dedication ceremonies were held in the fall, with state and national dignitaries that included then-president Gerald Ford. That same year, enrollment reached a new peak with the admission of 120 new students, twice the capacity of 60 students per class intended when the Veterinary Quadrangle was constructed.

1914 - War and Depression
In 1914 World War I broke out and veterinary work "was conducted largely along the lines of food production and conservation until the U.S. joined the Allies." When this occurred, Iowa State College was turned into a training camp, with one fourth of the veterinary staff joining the service and some of the remaining members anxious to get in. "Fraternities and large club houses were transformed into barracks and the gymnasium was used for a mess hall into which students marched in military form. Definite study hours were set aside and the students were required to congregate in assigned rooms where a designated person supervised their study." Then in 1918 the flu epidemic struck, taking with it a large death toll. The college was quarantined by the military with guards being stationed at all entrances. The veterinary staff had been more of less disorganized all this time and it was not until 1919 that the veterinary division was fully staffed and back in operation. It was at this time that the college curriculum was changed from the semester to the quarter system, which required a considerable revamping of courses. (ISU will again return to the semester system in 1981, once more requiring similar structural adjustments in the veterinary coursework.) The school was looking forward to a period of progressive development when the postwar depression struck in 1922. Student enrollment dropped, especially in agriculture and veterinary medicine. Farmers were discouraged and many veterinarians told young men entering the profession that it had "no future." During this period of decreased enrollment, there was increased emphasis on research, with considerable work being done in the areas of animal parasites, animal reproduction, and swine diseases, to mention a few. After this time, there was a steady growth of the school and an increase in student enrollment in response to the demand for more and better trained veterinarians. In 1929 limited enrollment of 60 freshmen was announced for the veterinary division thus beginning the gradual increase in higher acceptance standards for freshmen.

1933 - The Expansion of Departments
The increasing demand for veterinarians was answered by an increase in applications to veterinary schools. Many of these applications were from veterans of World War II. These veterans brought a new atmosphere to the Iowa State Veterinary School (still referred to as the "Division of Veterinary Medicine"). The veterans were older, more mature and had more responsibilities than many of their earlier counterparts; many of them were married.The students that entered the college and the faculty that taught them were just beginning to feel the pinch of too little space in the veterinary campus during this time. The most recent addition to the Division's physical plant was the Stange memorial Clinic, Completed in 1938. Members of the class of 1938 were the first class to complete their clinical training in the new building. The clinic space vacated in the Quad permitted the expansion of the Anatomy Department and provided a "studio" for the work of sculptor Christian Peterson. The Gentle Doctor, the Bas Relief depicting the work of the Veterinarian, and many other art pieces were created by him in a group of horse stalls in the southwest corner of the old clinic.With regard to the Veterinary Quadrangle across the street from Stange, some construction and renovation was done to alleviate the shortage of space for the faster growing departments. The Diagnostic Laboratory went from a few rooms in the clinic to the basement of the pathology building to its own building in a period of only eight years (1948-1956). The old Veterinary Clinic in the Quadrangle was renovated for use by the Anatomy department in 1956. Biomedical Engineering received its own building in 1962. The Division was managing to keep pace with much of the expanding medical technology of the day. The school became the first in the Midwest to have its own radiation therapy machine, purchased in the early 1950's from General Electric. Electric trocardiographic equipment, which is now gaining popularity with practitioners, was first purchased for the College around 1960. A major step in improving the school's research capabilities came with the purchase of an electron microscope in 1961. The microscope was purchased in connection with a rare earth toxicity study being undertaken by the college.

1959 - A Change in Name
With advancement and expansion the school's faculty and staff became increasingly dissatisfied with the references to the "Division of Veterinary Medicine." Dean Stange made specific reference to the inappropriateness of the name in a 1933 report in which he commented that "the advisability of changing the Division of Veterinary Medicine to "College of Veterinary Medicine" has been discussed for years. . . Apparently we have a "College of Veterinary Medicine" at Iowa State in fact but not in name. It is our earnest hope that this correction be made at an early date." In 1957, the faculty of the Division passed a resolution urging the change, but the action required making the other divisions within Iowa State college into separate colleges too. This action was finally taken two years later. The date is officially given as July 4th, 1959. Thus, more than twenty years after Dr. Stange's death, the school was a college in both name and fact.

1976 - Building the New Campus
There were indications all through the 1950's that the veterinary school was outgrowing its home: Haylofts and horse stalls were being pressed into service as offices, and departments began to expand into basements, corridors and utility rooms to gain more space. Apparently the situation was evident as early as 1952, when Dean Merchant wrote that, "although all of us realize that there are extremely critical deficiencies in our buildings and equipment, we must likewise recognize that it would take considerable time and money to replace them. Conservatively, it would take more than $5 million to replace our farmlands, buildings and equipment." Dr. Merchant's remarks were to prove prophetic, though somewhat conservative: It would take thirteen years and $25.5 million to build the new Veterinary College Campus.Formal plans for the new facility began to take shape as the decade progressed, and the question of the site for the new facility became a hotly debated issue. Four sites were proposed:

The plans moved forward as the college went on to convince University administrators of the need, then taking the request "through channels" of the Board of Regents and State Legislature. The new building was beginning to take shape. Although the planned building retained a traditional angular shape, the design concept was of a wheel, with student services (offices, library, lunchroom, audiovisual services, etc.) at the center and departmental wings radiating out from it. Student laboratories were to comprise the core of these radiating wings, with faculty offices and research laboratories located on the periphery. The feeling was that such an arrangement would offer the best possible utilization of space and the most efficient flow of traffic.The new building, with all of its blessings and few liabilities was finally completed in 1976, making the time span from early planning to completion approximately thirteen years. 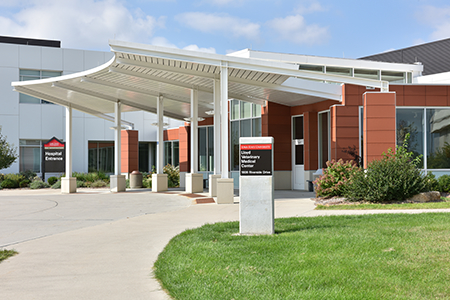 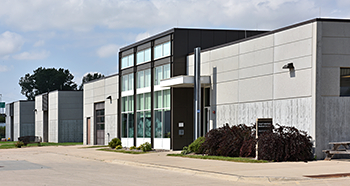 2008 - Expanding the Hospital
After almost three decades, the large and small animal hospitals were starting to show their age. A two-phase renovation of the veterinary medical center has provided the College of Veterinary Medicine with a world-class facility to support the college's commitment to cutting-edge care, education and research.

Because of the large demand for food animal services, the Large Animal Hospital has been expanded in recent years to include a new food animal field service building, a bovine and camelid addition, and an Equine Performance Evaluation Facility.