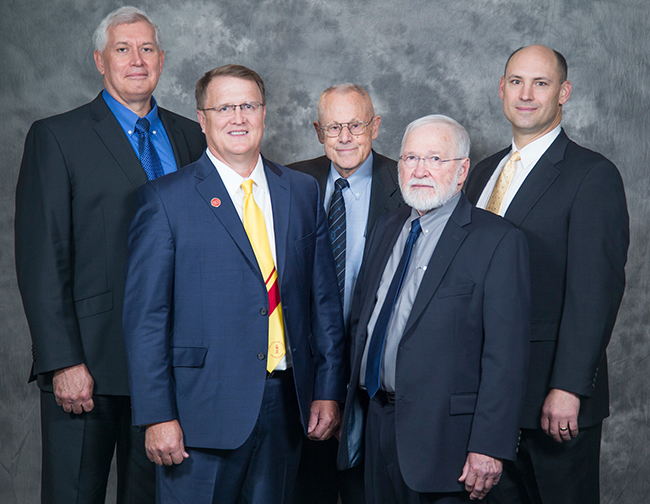 Four veterinarians were honored this weekend, as part of the college’s Homecoming activities. Recipients of the Stange Award for Meritorious Service and the Switzer Award in Veterinary Medicine were recognized at an all-college breakfast at the Gateway Hotel, and later at the university awards ceremony at Scheman Building.

The award is presented annually and recognizes distinguished alumni for outstanding professional achievements. It is the highest honor given to alumni of Iowa State’s College of Veterinary Medicine. This year's recipients are: Drs. D. L. 'Hank' Harris ('67), Richard Ross ('59), and Jack Shere ('87).

Dr. Hank Harris has a remarkable record of innovation, creativity, and knowledge transfer in the agriculture field that has revolutionized production animal agriculture worldwide. His unique ability to translate basic science into practical application has driven innovations in food animal disease management and elimination.

Early in his career, Dr. Harris played a key role in identifying the etiology of swine dysentery. His research efforts in the basic science of the disease ultimately led to elimination and control programs. While employed at PIC, he developed isolated weaning for infectious agent elimination and multiple site swine rearing systems that are used throughout the world.

He founded two successful vaccine companies that have made a profound difference in improving animal health worldwide – NOBL Labs and Harrisvaccines, Inc. In 1992 NOBL was sold to Boehringer Ingelheim Vetmedica. In 2014, Harrisvaccines was the first to develop and market a vaccine for Porcine Epidemic Diarrhea in the U.S. In 2015, Harrisvaccines was acquired by Merck Animal Health.

Now retired, Dr. Harris was on faculty at Iowa State University from 1970 to 1982, and again from 1992 to 2014. In the words of a colleague: “His leadership and innovative spirit will continue to leave a lasting impact on animal health and the agriculture industry on a global scale.”

Throughout his career in academia, Dr. Richard Ross, professor emeritus, has been committed to veterinary medicine and the agriculture industry. As a researcher at the College of Veterinary Medicine (CVM), he was internationally known as an expert in the field of veterinary microbiology. His research on swine respiratory diseases caused by mycoplasmas has had a significant impact on the understanding of mycoplasmal infections in animals and humans. It is estimated that Ross’ research on mycoplasmal diseases and vaccines has significantly reduced U.S. swine producer economic losses by millions annually.

Among Dr. Ross’ awards and honors are the Howard Dunne Memorial Award from the American Association of Swine Practitioners; the President’s Award from the Iowa Veterinary Medical Association; and the Research Excellence Award, one of the highest honors bestowed by the American Veterinary Medical Association. He also was the recipient of U. S. Secretary of Agriculture’s Award for Personal and Professional Achievement, recognizing his research contributions. He was also named a Clarence Hartley Covault Distinguished Professor in Veterinary Medicine by Iowa State University, and he was the 2014 recipient of the college’s William P. Switzer Award.

Dr. Jack Shere is the deputy administrator for the U.S. Department of Agriculture’s (USDA) Veterinary Services and the Chief Veterinary Officer of the United States of America.

During the 2002 END outbreak in California, Texas, New Mexico, and Utah, Dr. Shere led a massive federal and state eradication effort for nine months. And during the recent highly pathogenic avian influenza outbreak in the Midwest, he again led the USDA’s efforts to combat this devastating disease.

His work with industry groups, small farmers, veterinarians, and the public is exemplary. People trust him. His strong leadership skills, dedication to secure food supply for all Americans, and his knowledge and expertise have allowed the nation to overcome these incredible challenges, all while protecting the health and viability of our livestock and poultry industries and their role in feeding the world.

He has received numerous awards for his work from the USDA and the U.S. Animal Health Association. He was inducted into the Thomas Jefferson High School (Council Bluffs, Iowa) Hall of Fame in 2014.

The award is presented annually and recognizes individuals who have made outstanding contributions to society and to the College of Veterinary Medicine. It was named to honor and ISU researcher who made major contributions to our understanding of swine respiratory diseases. This year's recipient is Dr. Bill Williams.

Dr. Bill Williams is not a graduate of Iowa State’s College of Veterinary Medicine, but based on his support of the college and its students, and leadership in Iowa’s veterinary profession, he might as well have been.

Since coming to Iowa, after graduating from the University of Missouri’s College of Veterinary Medicine, Dr. Williams has been committed to service. As past-president and member of the Iowa Veterinary Medical Association (IVMA), he works to increase the visibility of the veterinary profession in Iowa, improve engagement with ISU’s veterinary students, and champion the IVMA foundation that provides more than $50,000 annually for veterinary student scholarships. He also volunteers with IVMA legislative activities on issues affecting veterinary medical practice and education in Iowa.

For years, Dr. Williams has actively helped the college in the recruitment of prospective veterinary students. A believer in ‘paying it forward,’ Dr. Williams has raised more than $10,000 pedaling across Iowa during RAGBRAI since 2011 for the Josh Challenge Project at the college. This group of veterinary medicine students provides hospitalized children with stuffed animals and resources to comfort them during hard times. Dr. Williams and the students have delivered hundreds of Josh kits in Ames, Des Moines, and Iowa City.

He does all this while co-owning and operating two small animal practices in Des Moines and Altoona. As said by a colleague: “Veterinary Medicine in Iowa is a better place because of Dr. Williams.”