Two alumni of Iowa State’s College of Veterinary Medicine were honored by the American Association of Swine Veterinarians during the association’s 49th annual meeting in San Diego, Calif., March 5, 2018.

Swine Practitioner of the Year

Dr. Mary Battrell was named 2018 Swine Practitioner of the Year. The award is given to the swine practitioner who has demonstrated an unusual degree of proficiency and effectiveness in the delivery of veterinary service to clients. 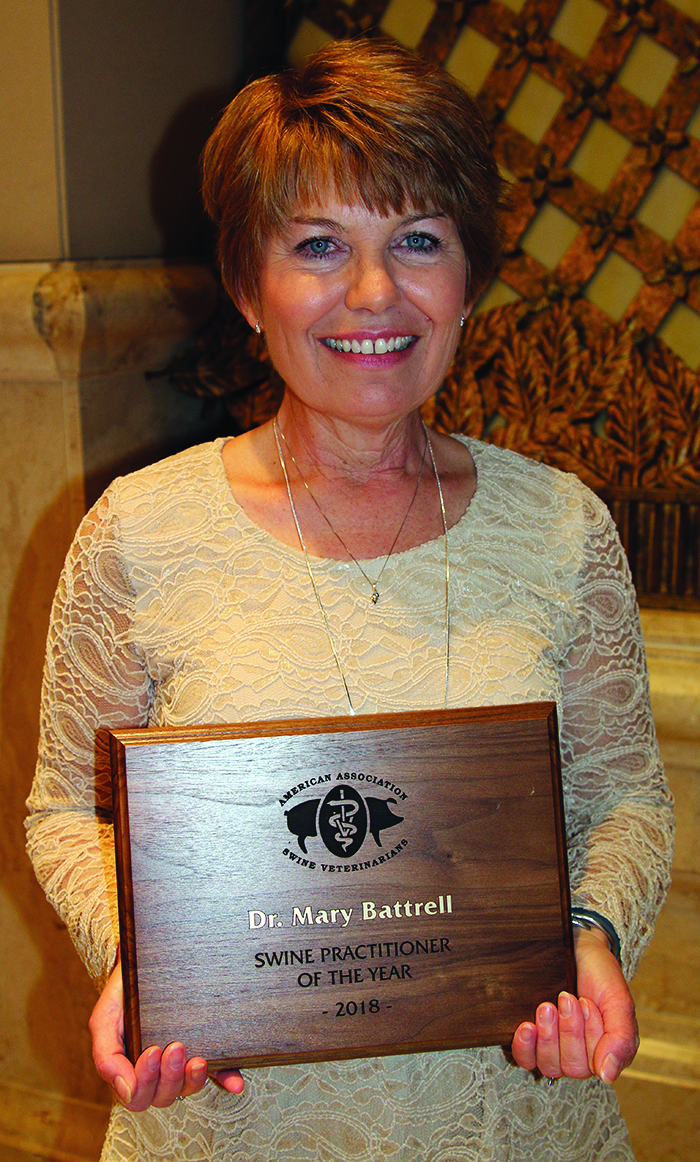 Battrell was born and raised on a family farm in Albany, Ohio. Her family farmed 250 – 600 acres of cropland, had a cow-calf operation, raised 250 feeder steers each year and had a 100-head farrow-to-finish swine operation. She earned a bachelor’s degree in agriculture from The Ohio State University followed by a master’s degree in Animal Science with a focus in ruminant nutrition from the University of Tennessee. Upon graduation, she moved to Iowa and worked as a sales representative for the Upjohn Company.

Battrell earned her Doctor of Veterinary Medicine Degree and a Master’s of Science degree in swine production medicine from Iowa State University in 1995. She began her veterinary career in private practice in North Carolina.  A year later, she accepted a position with Brown’s of Carolina in Kenansville, North Carolina, where she worked for three years.

Battrell worked as a technical services veterinarian for Pharmacia before returning to Smithfield Hog Production at the Murphy Family Farms Rose Hill office in 2000. She is currently the staff veterinarian for the East Central Region of Smithfield Hog Production and is responsible for the health and well-being of 140,000 sows. She has been actively involved in the development of the Smithfield Animal Care Program and serves as chair for that committee.

Asked to comment about receiving this award, Battrell replied, “Swine practitioners do an excellent job of caring for their animals and providing a safe and wholesome product for the consumer. It is incredibly humbling to be selected among them for this award. God has blessed me with a loving family, outstanding mentors, and co-workers that have guided me throughout my career. I am grateful for my Smithfield team, our care givers, and contract growers that work hard every day to put the pig’s needs first. I am proud to be a part of this industry. Thank you for the opportunities and for this recognition.”

Dr. Elizabeth Wagstrom was named the 2018 recipient of the American Association of Swine Veterinarians’ Meritorious Service Award. The award recognizes individuals who have provided outstanding service to the AASV. 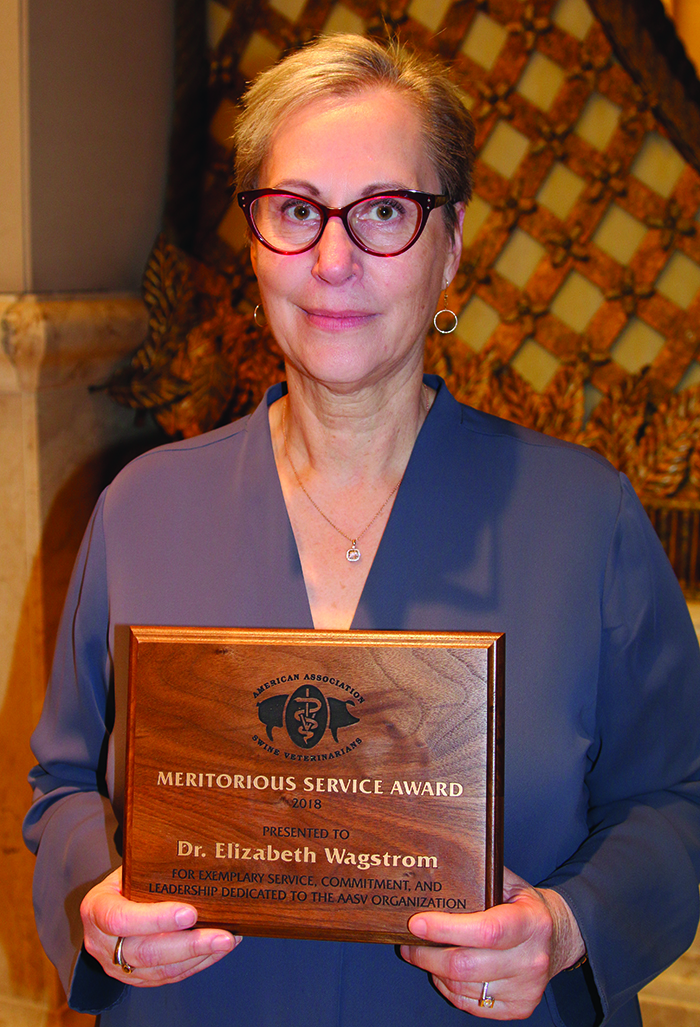 Wagstrom was raised in Montevideo, Minn., where she became an avid horse lover. This early interest in horses channeled her interest and education in the agricultural field.  Wagstrom attended the University of Minnesota where she obtained bachelor’s of science degrees in agricultural economics and animal science.

While living in Faribault, Minnesota, Wagstrom worked at a variety of jobs that revolved around the agricultural and science fields. One of the jobs was with Oxford Labs, a swine vaccine company headquartered in Worthington, Minn.  Her time spent at Oxford Labs was a launching point for her work in the swine field.

Wagstrom ultimately decided to return to school and obtained a Doctor of Veterinary Medicine Degree from Iowa State University in 1999. While at ISU, she also earned a master’s degree in veterinary preventive medicine.

Prior to earning her veterinary degree, Wagstrom worked as a marketing manager in swine biologics and diagnostics at Oxford Veterinary Laboratories in Worthington, Minn. She was a graduate research assistant at ISU from 1996-1998, and then went on to be a production management/veterinarian at Iowa Select Farms.

In 2000, she was employed as a public health veterinarian and senior epidemiologist and at the Minnesota Department of Health. From 2001-2004, she served as the director of veterinary science at the National Pork Board in Des Moines, Iowa, and later promoted to assistant vice president of science and technology.

In 2010, Wagstrom accepted a position as an associate professor and Veterinary Public Practice-Residency Director at the University of Minnesota Center for Animal Health and Food Safety. Since 2011, she has been the chief veterinarian with the National Pork Producers Council in Washington, DC, and Des Moines, Iowa.

When asked to comment about receiving the award, Wagstrom responded, "I am honored to receive this award from my peers, and am so appreciative that the work I do with the National Pork Producers Council allows me to advocate not only on behalf of the pork industry but also the swine veterinary profession."