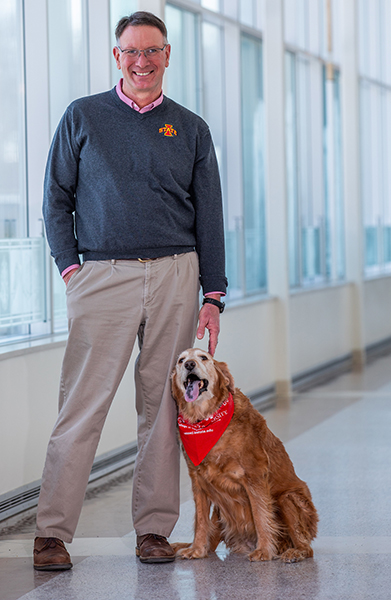 Grooms, who earned both his DVM ('89) and PhD ('97) from Ohio State began his career in general practice in rural Ohio. He then accepted a position as clinician at the Ohio Agricultural Research and Development Center and quickly transitioned into a PhD program where he conducted research on Bovine Viral Diarrhea Virus (BVDV). Upon completion of his PhD degree, he accepted a faculty position at Michigan State University College of Veterinary Medicine where he was a professor, extension veterinarian, administrator and researcher. He was named chair of Michigan State’s Department of Large Animal Clinical Sciences in 2014 and was named an honorary alumnus in 2015 at Michigan State University and received a Michigan Honorary State FFA Degree in 2013.

During his time in Michigan, Grooms was actively involved in the 4-H program, his church and numerous sports. He started officiating Michigan football in 1998.

Grooms holds board certification from the American College of Veterinary Microbiologists with a specialty in veterinary virology. He is a former president of the American Association of Bovine Practitioners and has served on the U.S. Secretary of Agriculture's Committee on Animal Health. An expert in bovine infectious diseases, Grooms has been an active researcher in his academic career, receiving multiple grants from the U.S. Department of Agriculture, higher education institutions and private companies.

Grooms became the Dr. Stephen G. Juelsgaard Dean of Veterinary Medicine at Iowa State on October 1, 2018 and is also an active contributor to his community. He is involved in Iowa 4-H, FFA and officiates for high school football.

Ohio State’s College of Veterinary Medicine has been honoring the contributions of alumni with this award for more than sixty years, recognizing more than 250 of its esteemed alumni. Each of the honorees have made exceptional contributions to the veterinary profession through their scholarly work, teaching, research, education, mentorship, service, and outreach in the community.