Proclaiming One Health to Iowa

Efforts to organize the Iowa One Health Conference paid off for a group of Iowa State University and University of Iowa students not just once, but twice.

The first payoff came with the successful completion of the conference, which was held in mid-October on the University of Iowa campus. It wasn’t until months later that the students learned their efforts had a second big payoff.

The Iowa One Health team was one of two student teams to win the international 2017 One Health Day Student Events Competition. Competing groups had to meet a set of qualifying criteria and were required to submit a post-summary.

For their efforts the Iowa One Health team was awarded $2,000.

“This was our second annual Iowa One Health Conference,” said Neil Vezeau, VM1 at Iowa State and the event’s general co-chair, “and we built on our first conference to make this event even better.”

Logistics played an important role in organizing the conference. So did getting students from the Iowa colleges with medical programs invested in the event.

“We expanded our inter-institutional cooperation for every major post-secondary medical college in the state,” Vezeau said. “All the work these people from multiple institutions put into the conference was phenomenal and made the conference a success.”

The effort Vezeau and the other committee members put into the conference was extensive.

“Some weeks this was almost a part-time job,” he said. “This was something you have to be passionate about.”

While there wasn’t a theme to the conference, which attracted 60 attendees, Vezeau said the sessions focused on why One Health was so impactful worldwide.

The team continued its work long after the October conference concluded. In November, Iowa Governor Kim Reynolds declared the month of November as “Iowa One Health Month” through a gubernatorial proclamation.

“This proclamation recognizes the many students and professionals across Iowa who work to promote the concept of One Health,” said Jake Swanson, general co-chair of Iowa One Health and an Iowa State graduate. “Awareness and application of One Health concepts is increasing in Iowa and we are grateful to Governor Reynolds for supporting Iowa’s place as a global leader in One Health.” 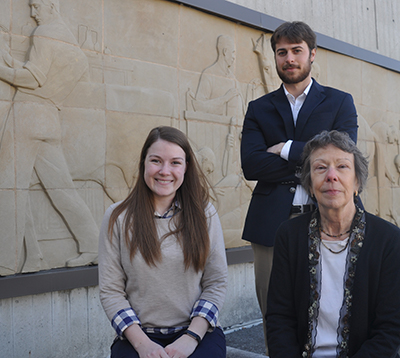 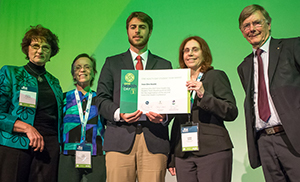 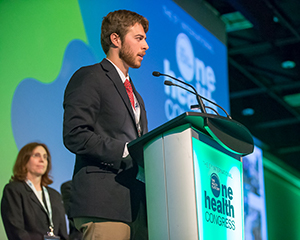 Neil receiving the award at the 2018 One Health Congress.