THE COMPASSIONATE CLIENT
Make a Gift 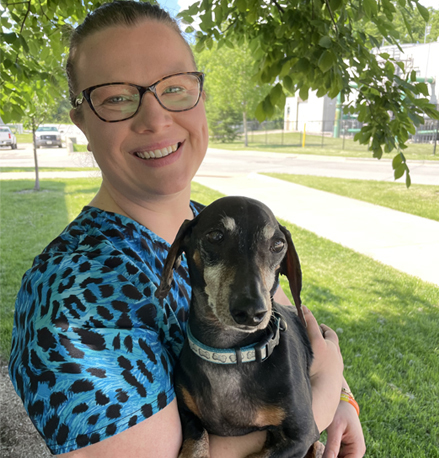 If Toad was a human being, he would be featured on one of those weight loss commercials.

Those are the commercials which feature before and after photos of the individual, depicting a big weight loss after beginning a new diet.

But Toad isn’t a human being. He’s a nine-year-old dachshund and like his human counterparts he also has an amazing weight loss story.

Toad, whose real name is Oscar, came to Liz Wunsch’s household two years ago. Toad had previously lived with an elderly relative who had passed away. At the time Toad came to live with Wunsch he weighed 34 pounds.

“We knew when we got him, his weight was impacting his health,” said Wunsch, who is a veterinary technician in the Hixson-Lied Small Animal Hospital.

Two years ago, Toad was so overweight, he couldn’t climb the three steps into Wunsch’s house without help. His gait was so unnatural, that Wunsch said “he looked like a toad when he walked” – hence the name change.

“Dr. Blong does a lot of work on nutrition, and she helped develop a plan to safely get Toad to his optimal weight,” Wunsch said.

The plan included eliminating all human food from Toad’s diet and feeding him on a constant timeframe. The Wunsch household also included three other dogs who were fed twice a day. That schedule helped Toad in his eating habits as well.

“Toad became part of our dog pack,” Wunsch said. “That was probably the biggest way he adjusted because he saw that when they eat, he should only eat then as well.”

Remember, Toad weighed 34 pounds when he came to his new home in August 2020. Less than a year later, Toad had dropped more than half his body weight and for the past 12 months has maintained a weight of 15 pounds.

Today, Toad no longer needs help navigating the stairs into the house. His weight loss means he was able to go under anesthesia to get his teeth a much-needed cleaning.

“When we first got Toad, the only thing he would do was do a short walk and then lay down,” Wunsch said. “He wouldn’t get excited about anything. Now he’s happy and doing all the things dogs do.”

Wunsch says that while her profession may have made it easier for her to set boundaries for Toad, assisting companion animals to lose weight can be accomplished by anyone.

“I’ve seen how obesity can affect an animal’s life span and maybe those observations made it a greater priority for us to help Toad lose weight,” Wunsch said, “but I believe everyone can set those boundaries with their pet.”