THE COMPASSIONATE CLIENT
Make a Gift

When Mollie Sue was brought to the Hixson-Lied Small Animal Hospital Emergency Unit, she was experiencing rapid breathing. Both her hind legs were swollen and she had fluid on her chest.

Three weeks later, the four-month-old Labrador Retriever walked out of the hospital to the applause of dozens of the College of Veterinary Medicine clinicians, technicians and fourth-year students who worked together to treat Mollie.

“When Mollie was first presented, she was very ill and there were many times during her stay that we were concerned for her ability to leave the hospital,” said Dr. Chelsea Zorn, small animal emergency and critical care resident.

During this surgery, the College of Veterinary Medicine surgical team were able to use a minimally invasive approach to visualize her lungs. During the procedure, they had to remove the entire right side of her lung lobes due to severe pneumonia.

“Molly had a rocky recovery and required a blood transfusion and high velocity nasal oxygen but with aggressive supportive care, she was able to be weaned from all of her therapies,” Zorn said.

“Mollie’s care was a collaborate effort,” said fourth-year student Katie Willoughby who was the initial student who triage the puppy when she was first presented to the hospital. “Many people spent many hours with her over her days in the ICU.”

Throughout Mollie’s ordeal, she was a model patient, even when she was first admitted to the hospital.

“When she was presented to emergency, her tail was wagging and she was giving out kisses to anyone she could,” Willoughby said. “Mollie is a special dog, maybe the most perfect patient. Her love for people and her resilience touched the hearts of everyone who had the pleasure of being a part of her journey.”

That happy-go-lucky attitude was evident when Mollie was preparing to leave the hospital and return home. Dozens of students, clinicians and technicians came by to tell Mollie goodbye and she met each and every one with the same attitude, giving kisses and receiving belly rubs. Watch Mollie Sue's farewell send off.

And when it came time to be reunited with her owners she pranced happily down a hallway lined with her supporters.

“It was absolutely amazing to walk her out of the hospital and for her to be surrounded by a group of people who helped to make it all possible,” Zorn said. “We couldn’t be happier that she was able to go home with her family.” 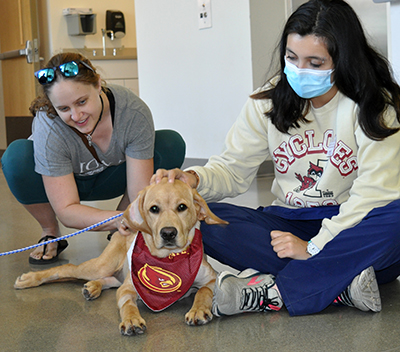 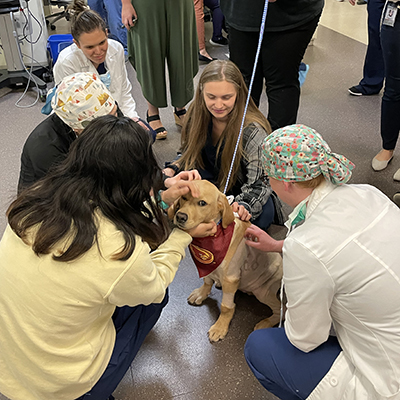 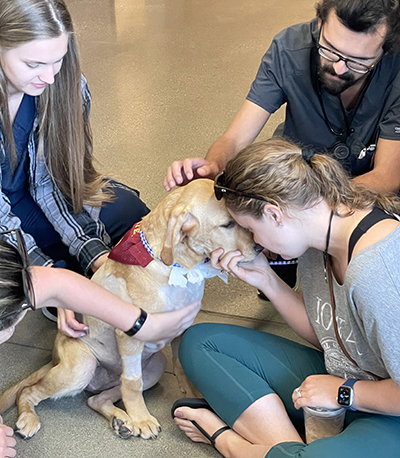